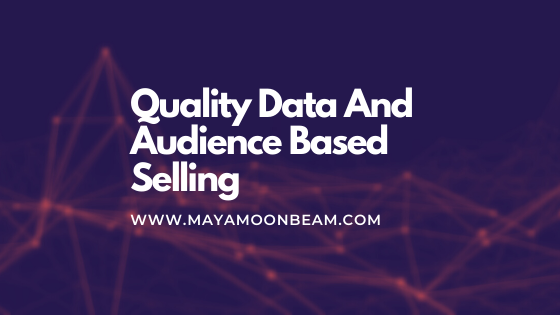 In hindsight, it’s no secret that data has been a hot, albeit controversial, topic for all of us in the digital advertising industry in 2018 and 2019. The dreaded GDPR and Facebook’s ban of 3rd party data are just two examples of why a spotlight has been continuously shining on data transparency this year.

The days leading up to May 25th last year had many of us in the industry worried about the effects of the strict new data regulations GDPR put into place. Not only in the EU, but across the globe. After all, it allowed the consumers to control how businesses collected and processed their personal information, giving them even more power than they began with in the purchasing process.

Shortly after GDPR, Facebook announced it would shut down Partner Categories, a section within their advertiser tools, allowing 3rd party data brokers to sell their data for the use of audience targeting. Data providers such as BlueKai and DataLogix were questioned at the time as one of their main selling points to advertisers was the partnership with Facebook and the ability to match against their audience data for increased quality of ad targeting.

Months later, the industry began find its place and adapt to the newer regulations. Programmatic spending quickly went back to a healthy state, we saw a rise in the use of contextual advertising and people-based data is preferred over cookie-based.

The industry is now moving toward a people-based approach which gives us the ability to target real people linked across multiple devices using registered user data such as email or social registration data. The difference is in knowing you’re targeting an 18-35 year old female who lives in Dallas versus a 37 year old female who lives in Dallas, is married with 2 children, is loyal to Starbucks and loves The History Channel. Which would you choose?

The ability to target such a quality audience is just the tip of the iceberg. Advertisers aren’t just buying and tracking impressions and clicks anymore. While viewability is still among one of the top concerns in digital advertising today, as a publisher, it isn’t the only metric you can expect advertisers to keep a close eye on.

The majority of advertisers are taking advantage of Google Marketing Platform’s advanced reporting and attribution tools. Advertisers, or the agencies representing them, are not only looking to track viewability, but they want to know if their ad on your website was viewable for a considerable amount of time, with an above average reach, served to a quality target audience and if/how it contributed to a conversion. While it may seem like a lot of work for the buy-side, most of these insights are easily available with simple tagging in place.

Within Google’s Campaign Manager, advertisers can utilize Active View, Google’s viewability measurement tool, to track Viewable Impression Reach. This allows them to gain better insight into how many unique users were exposed to their campaigns, if the unique impressions were deemed viewable, and how long they were actually viewed in seconds.

They can also take advantage of Campaign Manager’s Multi-Channel Conversion Visualizer and track their conversions, assisted conversions, the first interaction for a user, the top conversion paths and those path lengths.

Gone are the days of simply opening an under-delivering campaign to ROS and removing the frequency cap in order to reach an impression goal and expecting advertisers to be satisfied with the results. Advertisers truly want quality over quantity, they want transparency, they want fully trackable return on ad spend – and they are willing to pay much more for it.

Taking Advantage of Audience Based Selling

One way publishers can ensure they provide successful, results-driven campaigns is by taking advantage of multi-channel Audience Based Selling. Advertisers have been shifting towards this buying approach, not only for the benefit of increased performance, but for the increased amount of transparency it provides as well.

Let’s say you are a local automotive dealership with $15,000 to spend on your big Year End Sale. You’ve created an awesome 15 second video ad to promote it and you don’t necessarily care if that video ad runs on YouTube, as a direct sold pre-roll on the website, on the app, if it runs as a programmatic guaranteed pre-roll, or even as a Connected TV ad. You simply want to be confident that it will be viewed by an audience who will be most likely to purchase a vehicle – such as auto intenders who have leases expiring in the near future and live within 25 miles of your dealership, for example.

These multi-channel audience based campaigns can be huge revenue drivers for publishers as they can easily increase the cost knowing they are providing quality over quantity in terms of impressions or views. However, in order to execute these types of campaigns properly, publishers must first invest in the right data partners and take the time to understand their own 1st party data.

Whether we’re talking about 1st party, 3rd party, cookie-based or people-based data, the rules are all the same. We’re only at the beginning stages of strict data regulation and it will continue to be a hot topic for the rest of 2019 and beyond. As members of the digital advertising industry we have a responsibility to adapt and adhere to these new standards. On a positive note, it’s becoming a bit easier to understand the potential benefits of increased data transparency and privacy regulations.

While we’re collecting less data overall, the data we are collecting is of much higher quality. We are able to practice what we’ve always preached regarding quality over quantity in the digital industry. With clean, fresh data from users who are actually opting in and are open to receiving messaging from advertisers, our smaller pool of data includes a much more captivated audience. Combined with options such as people-based data, we are able to take advantage of tactics like an audience based selling approach in order to exceed advertiser expectations.

One Reply to “Quality Data And Audience Based Selling”